A Namibian Safari of Cultures: The San People of Nyae Nyae 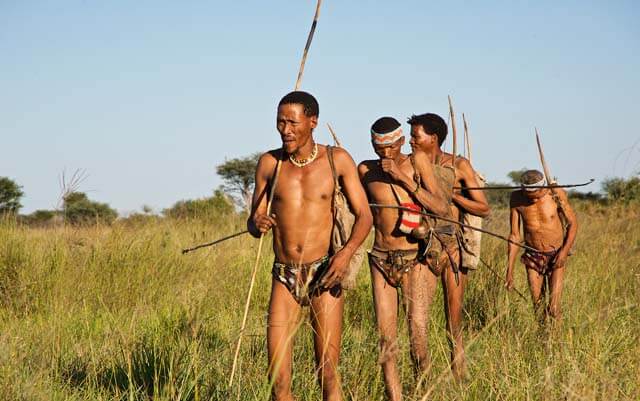 In the opening scene of The God’s Must Be Crazy, a glass coke bottle falls from a passing helicopter and lands among a group of nomadic San people. At first a thing of fascination for the group, it later becomes a source of conflict and an object of evil that needs to be destroyed.  The film takes off as one of the San elders, Ju/’hoansi travels to the end of the earth to return this object to the gods that gave it to them.

The San actor who plays this role is a Namibian San farmer called N!xau, whose people are as much a source of interest and fascination to the Western world as the fictional group in The God’s Must Be Crazy are.

It is guessed that around 40 000 San people live in Namibia, but only around 10% of this number still live the traditional nomadic lifestyle of the pre-colonial San.  The San people, who are genetically quite close to the Khoi Khoi people and tend to be classified together by anthropologists, are believed to be the oldest human population on earth.

They stem from a group of late stone age people who lived in this region as far back as 30 000 years ago.  Scientists can identify the relative age of a group of people by the diversity of their genetic make-up; it takes time for genes to evolve, so the more diverse the genes are in a group, the longer that group has been around.

The San of the Nyae Nyae region have the most diverse genetic make-up of any human group studied so far.

The San are generally small in stature and tend to be nomadic, or at least this is the case with those who still live the traditional lifestyle. The main area of habitation for the San is the Nyae Nyae area in Namibia but they do migrate.

Movement is generally limited to within the Kalahari, through the whole of the Ovambo region, and from Grootfontein to the Kavango River, and even into the Caprivi.

Tourists to Namibia can visit the Nyae Nyae Conservancy, here the San people manage their own tourism and wildlife and use the area as a form of income.  Visitors can take part in San cultural tours, where you can go on walks with a San guide, who will show you how to track game, collect food and let you in on some other secrets of the land.

A Namibian Safari led by a San guide is much closer to nature than a safari led by a ranger in a 4X4.  Options range from just going for guided walks to spending over a week in a tented camp living with the San of the Nyae Nyae.

A fascinating and beautiful group of people, please do share your experiences with us if you have interacted with the San of Nyae Nyae or visited the Conservancy.