Connecting with Dolphins in Namibia 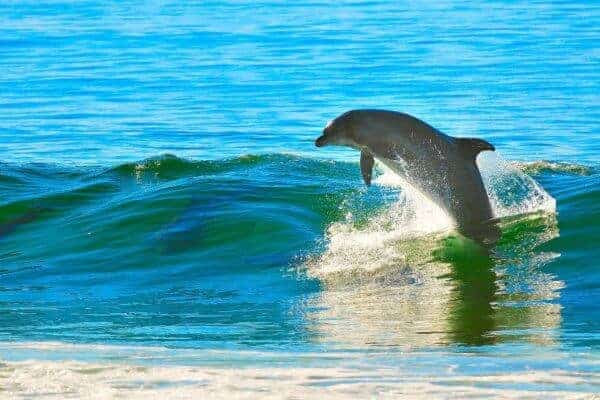 The relationship between dolphins and humans is a complex one, because of human activity all sea life is under threat to some degree – but humans tend to love and revere dolphins.  Dolphins in turn, seem to recognise kindred spirits in us.

Tales of dolphins rescuing human beings from drowning or protecting them from shark attacks are common.  One of the most famous stories is a pod of dolphins circling a family who were out swimming, the dolphins slapped their tails on the water and would not let the family leave the circle as they hustled them back to shore.  A shark had been heading towards the family.

Namibia boasts a healthy dolphin population in its waters, and visitors to Namibia can take dolphin cruises to meet and interact with these fascinating water dwelling mammals.

Three species of dolphin live in the Namibian waters; these are the Heaveside’s dolphin, which are most often spotted, but also the Dusky dolphin and Bottle nose dolphins.

For those who remain conservation aware and worry about the impact of dolphin cruises on the health and happiness of dolphin populations in the area, there is little reason for concern.

The Namibian Dolphin Project works with marine tour operators, the government and the local community to try restore the sea life on the Namibian coast and ensure a safe environment for the dolphin populations.

Namibian safaris come in many shapes or forms, and a dolphin cruise on the Namibian coast is yet another incredible experience for visitors to the country to see not only dolphins, but if they are lucky also killer whales (orcas), humpback whales and leatherback turtles.

The birdlife on such tours is also a treat. For those who like the finer things in life the champagne and snacks served while Dolphins play around the boat will not go amiss.