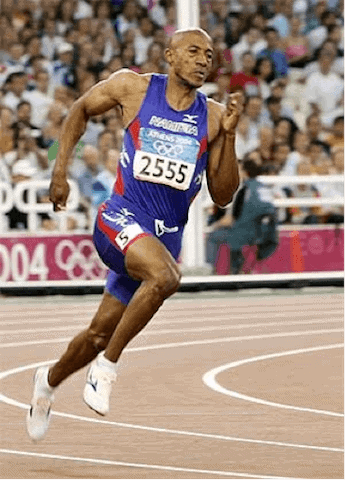 It would seem that 2015 is turning out to be a good year on the athletics field for Africa.  Durban, South Africa, has been awarded the distinction of becoming the first city to host the Commonwealth Games in 2022, and Frankie Fredericks, a Namibian former athlete, was recently elected to serve as a member of the International Association of Athletics Federations (IAAF).

Distinguishing himself both on and off the athletics field – Fredericks is the only Namibian to have earned four silver Olympic medals and the only Namibian to serve on the IAAF individual council member’s team. He has also been a member of the International Olympic Committee and was the head of Athletics Namibia until 2013. He remains an active member of Champions through Peace, an organisation that promotes peace in the world through the medium of sport.

Fredericks is also actively involved in his own initiative, the Frank Fredericks Foundation that promotes the development of talented young Namibian athletes and the improvement of sporting facilities in Namibia.

Born in 1967 in Windhoek, Fredericks was fortunate to receive a university scholarship to attend Brigham Young University in Utah, (BYU) from 1987.  During his time in the USA he scooped several all-American citations and won three NCAA championships.

His desire to represent his country came was fulfilled in 1990 when Namibia became independent of South Africa. Fredericks returned to his homeland in the same year to compete in the World championship and was rewarded with a silver medal for the 200m and a fifth place for his efforts in the 100m event.

Frankie Fredericks at the Olympics

Next, he went on to compete for the Namibian team at the Barcelona Olympics where he achieved silver in both events, a feat which he repeated in 1996.  The World Championships in Stuttgart, the following year, saw him add a gold medal to the trophy cabinet.

Being one of Southern Africa’s most successful athletes, Frankie Fredericks is held in high regard, not just for his winning performances and record-breaking times, but also for his unfaltering sportsmanship and his humble, courteous behaviour.

During the 1995 World Championship, Fredericks famously turned back after crossing the finishing line to assist his friend, Linford Christie, who had injured himself during the race, securing his place firmly in the hearts of athletics fans and athletes alike.

Along with his popularity, his achievements are legendary.  While he had to settle for second place on numerous occasions, each of these efforts was a record-breaking one, and it seemed that during his prime it was impossible to beat Fredericks unless you could break a record at the same time.

His 200m record as the oldest man to finish this track event, in less than 20 seconds no less than 24 times, remains intact to this day. Fredericks still holds the third-fastest non-winning time for the 200m, and it was only in 2013 that his world indoor 200m record of 19.92 seconds was broken by none other than the lightening sprinter, Usain Bolt. These achievements, along with 27 instances of finishing the 100m within 10 seconds, place him at number 9 on the All-Time list of the Commonwealth Games.

Namibia is justifiably proud of this outstanding athlete and gentleman almost as well known for his good sportsmanship and easy going manner, as his speed. A widely respected role model to young athletes and fellow Namibians, Fredericks has earned his right to be thought of as one of the world’s finest sprinters.