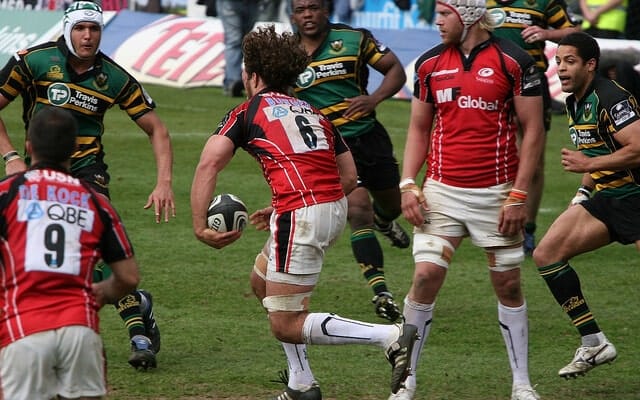 “England is my second home but Namibia is the place where I first picked up a rugby ball. That’s why I am here now, so I owe them for that — if I could do it all again I wouldn’t change a huge amount.”

These are the earnest words of Jacques Burger with regard to the 2015 Rugby World Cup, where he could have represented two major contenders for the cup, England or South Africa, instead opting to play for his homeland, Namibia.

This decision resulted in a memorable event for the Saracens player as he Captained Namibia’s closest ever taste of victory in a World Cup on 8 October 2015.  The lowest ranked team in the event, Namibia was in the lead against Georgia at half time, and was defeated by just one point at the end of play.

Unfortunately, Burger was carried off the field after a tackle on Georgia’s rather solid centre, Merab Sharikadze, left him unconscious ten minutes into the match and he has subsequently announced that he would be withdrawing from the side’s last game against Argentina due to a concussion.

Born on 29 July 1983 in Windhoek, Burger will retire from his illustrious rugby career at the end of the season, aged just 32, in a classic case of ‘the spirit is willing, but the flesh is weak”.

During his time on the playing fields of the world, Burger has suffered 60 injuries, many in the last two years, and had numerous procedures to repair his damaged body from broken cheek bones and ribs, torn quadriceps and nerve damage.  He has also undergone a number of arthroscopic surgeries on his shoulder and knees.

Throughout his time on the field, Burger was known for his passionate play and fearless tackling, performed with total disregard for his own safety.  He has earned himself a reputation as one of the toughest tacklers in the English premiership and was Saracens Player of the Year in 2010/11.

Although he has represented the South African team, The Bulls, on occasion, Jacques Burger has always opted to play for Namibia in major international competition sporting the blue jersey of the Welwitschias (Biltongboere) in both the 2007 and 2011 Rugby World Cup tournaments.

With rugby in his heart Burger hopes to spread his love of the game coaching in either France, Italy or the USA before returning to his farm at Stampriet, on the fringes of the Kalahari Desert, for good.