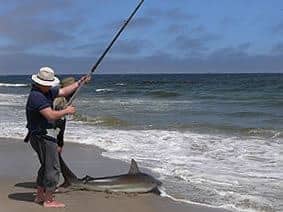 Namibia is a hotspot for anglers with thousands of fishermen flocking to the coast in search of something for the record books.  The most popular angling spots are:

The most popular time for fishing is when the waters warm up after winter and you will find that accommodation in Namibia is overrun with fisherman from November until March every year.

They come to do battle with the kabeljou, galjoen, blacktail and west coast steenbras. These fish all put up a good fight and grow to enormous sizes making them sought after targets as well as delicious to eat.  There is nothing more rewarding for an angler than relaxing alongside the fire, grilling his catch of the day after hours of waiting patiently for a nibble.

Sharks are another species on the hit-list for anglers visiting Namibia and these tyrants of the sea provide a challenge to even the most experienced fisherman. Spotted gully sharks, cow sharks and smooth hound sharks are caught year round, but the most sought after is the copper shark, and the best time to catch them is from November to May.  Sharks are protected in Namibia and all sharks must be returned to the ocean unharmed and alive after the day’s sport.