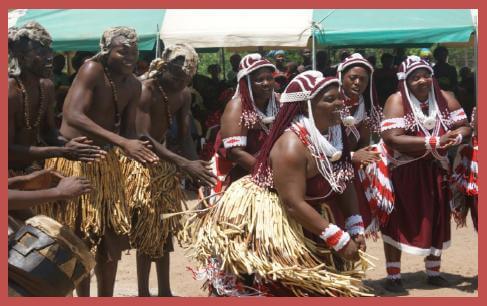 En Route to your accommodation in Namibia you will notice a thriving roadside trade in beautiful woodcarvings, baskets, clay pots and ornaments.  The carvings are largely the work of the Kavango men who are skilled at transforming the dolfwood of the Kalahari sandveld into a variety of ceremonial drums, musical instruments and household items, while the women weave baskets and make clay pots and ornaments, which they sell to visitors with grinning enthusiasm.

These people reside in the Kavango region of Northern Namibia on the Angolan border along the Kavango River, which is named after them.  The river is pivotal to their survival and they grow crops on the narrow strip of fertile soil alongside it, graze their cattle on the flood plains, fish the river extensively and hunt the wild animals that live there.

Five tribal groups, each headed by a king, can be distinguished amongst the Kavango and these kingdoms are further grouped into clans and matrilineal family groups.  All political, social, economic and religious functions of society are performed within the framework of these groups.

The lineage consists of both male and female members, but the line of descent is only traced through females.  This means that should a man hold a hereditary political position, it is passed on to his sister’s eldest son and not his own children.  Kavango traditional law is legitimized by the Namibian constitution.

Male and female roles are traditional with the men doing the hard labour and caring for the cattle.  Cattle are highly valued as a status symbol and are used for milk, meat, hides and ploughing as well as rituals and animal sacrifices.

Traditionally the Kavango believe in one Supreme Being, Nyambi, and his cooperation is secured via prayers and sacrifices to the ancestors, and by adhering to a wide range of religious prohibitions e.g. food taboos, incest taboos and various other proscriptions.  Magic plays an important part in the everyday lives of the Kavango people and diviners and medicine men are highly respected even though most of the Kavango now practice Christianity.