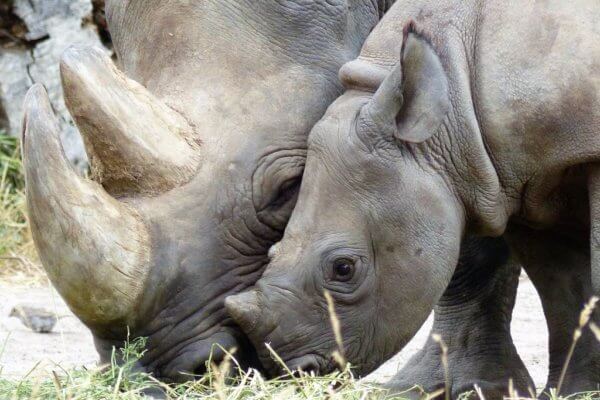 One of the undisputed highlights of a Namibia Safari is stumbling upon a small group of black rhino, or a mother with her calf. This is sadly a rare treat as the black rhino is categorised as critically endangered, with only about four and a half thousand of these animals left.

This is the 2008 number, which is an increase from the 1995 number of only two and a half thousand.  The black rhino found in Namibia are south western black rhino; their habitat is arid and semi-arid regions, usually around the hills and plains of the northern Namib.

Anybody who has been so lucky as to have seen a rhinoceros up close will not be in the least surprised to hear that the origin of the African rhino can be traced back 1.5 million years:  where the likely ancestor of the black rhino, the Dicorus Praecox makes an appearance in the fossil records.

The rhino are also critically important to the ecology of their habitat as they clear back much of the tree and shrub life in order to allow grass and other plants to grow.  It goes without saying that to lose these animals would be a global tragedy.

Namibian conservation of the black rhino was led by the Save the Rhino Trust, an organisation founded in 1982.  At this time there were only 55 desert dwelling south western black rhinos left.

The Save the Rhino Trust, the Namibian Government and other conservation groups have managed to halt this decline and assist in increasing the rhino population through vigilant anti-poaching measures and the re-introduction of rhinos into different regions where previous groups were wiped out.  This to some extent manages the problem of the increasingly restricted habitats for rhino.

While the numbers of the south western black rhino are on the rise again the species remains under threat, specifically by poachers who are after the rhino horn.

The horn is made up of keratin, a substance no different from our own fingernails, but is used in Chinese herbal medicines and to make ornately carved handles for ceremonial daggers.