The Damara People of Namibia 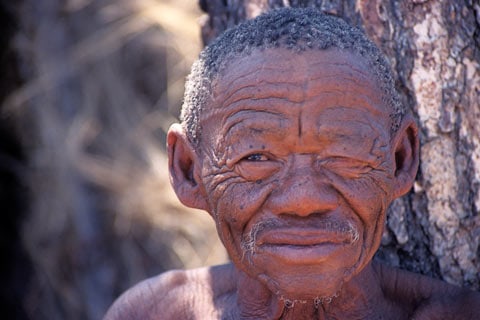 Together with the San, the Damara are one of the oldest nations in Namibia and their origins are unrecorded.  This is largely due to their loose social structure, which made them unable to defend themselves against the more unified tribes, dispersing them far and wide and driving them, for the most part, into servitude.

Prior to 1800, the Damara occupied most of Namibia as hunter-gatherers and herders of cattle, goats and sheep – skilled in copper work yet unfortunately no match for the dominant cultures who sought to take ownership of their land.

During the 19th century, conflict between the Nama and the Herero, squeezed the Damara folk out of their settlements, driving them to the hills and many of the Damara people became servants to these stronger tribes.

In 1960, the South African Government set up the Damara Reserve (Damaraland) in the Northwest of the country but the poor agricultural quality of this settlement did not suit this farming clan and most of them sought work and accommodation in Windheok, Okahandja, Swakopmund, Walvis Bay, Otavi and Tsumeb.

Traditionally, the Damara are divided into several tribes, each with its own chief, but are ruled by one monarch, King Justus ǁgaroëb.  Some of the Damara still own and live on farms, carrying on their traditional ways and have become very rich in cattle and sheep farming.

The women fulfill the customary female roles such as household chores and nurturing the children while the men hunt and care for the livestock.  Several have found their niche in public service and, along with other public figures; the Prime Minister, Hage Geingob and Labour Minister Moses Garoeb, hail from the Damara Tribe

For an insight into the culture and history of these mysterious people, visit the Living Museum of the Damara close to Twyfelfontein.  This museum is the only traditional Damara project in Namibia and in the world, attempting to reconstruct the ‘lost culture’ of the Damara people.  Here you will get to witness their interesting traditions, contribute to their welfare and perhaps uncover some of their secrets.