The Tswana People of Namibia 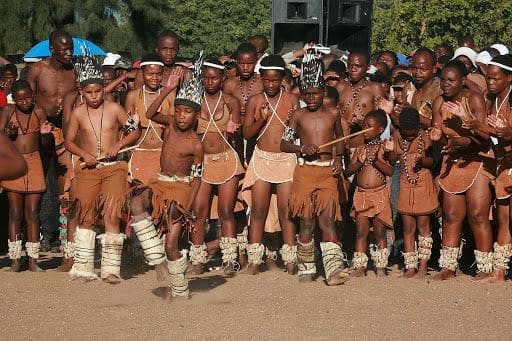 The Tswana are the smallest cultural group in Namibia, numbering some 6000, and are located mainly in the Gobabis district near the Botswana border (Hereroland).  They are divided into three sub-groups known as the Tlharo, the Thlhaping and the Kgalagadi, who have mixed with the Kalahari Bushmen to a degree.

The ancestors of the Tswana tribe moved to the area south of the Limpopo from East Africa during the 14th century in several separate migrations.  Here they split into two groups, the Basotho of the South and the Batswana of the west.  Centuries of fighting amongst themselves, decimation by the Zulus under King Shaka and fighting with white settlers dispersed the Tswana people over a large area.  When the British colonized the Transvaal, the Tswana people were granted a large tract of land called the British Protectorate of Bechuanaland, which became the independent state of Botswana in 1966.

Totemism is a major feature of the Tswana belief system and each member of the nation associates themselves with a specific animal, plant or object adopted in accordance with ancient myths and legends.  This carries with it responsibilities and rituals which must be obeyed.  Anyone contravening these rules has to undergo ritual purification to prevent bad luck.  Although tribal alliances have almost disappeared, the Tswana people do acknowledge the ancestral relationship they share with others of the same totem.

The family group is patriarchal, with the smallest unit consisting of a husband, his wife and any unmarried children.  Traditionally the family would live in a homestead consisting of one or more houses, a grain storage shed and a courtyard surrounded by a mud wall or a reed or wooden fence.  Today, they have taken accommodation in Namibia that is more modern, and most of them have adopted Christianity in favour of their ancient beliefs.