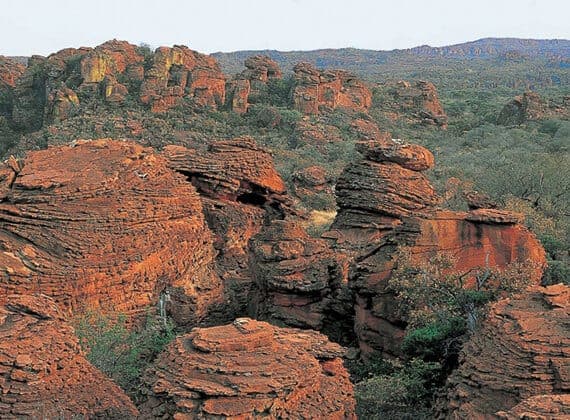 We are all familiar with the big game parks in Namibia such as Etosha, Namib Naukluft National Park, Sossusvlei and the Caprivi Strip. However, one of the most successful reserves in the country, conservation-wise, is the relatively low-key Waterberg National Park. Rising high above the surrounding savannah and almost inaccessible, this park provides sanctuary to 26 mammal species including the  Cape buffalo,  tsessebe, sable and roan antelope and the critically endangered black rhinoceros.

Declared a National Park in 1972, the Waterberg has achieved outstanding success in conserving Namibia’s most endangered species and their numbers are steadily on the increase.  Although figures cannot be released publicly for fear of poachers, the black rhinoceros population is thriving in the absence of mankind’s encroachment and under the watchful eyes of the Parks Board staff.

For millennia, the Waterberg has resisted climate change, flooding, erosion and massive sheets of ice and still stands as a bastion of survival, looming 200m above the surrounding landscape.  It was the site of the Herero uprising against the German colonial forces and a graveyard near the entrance to the park commemorates those who lost their lives here.  Many millions of years ago, dinosaurs came and went, leaving their footprints behind for visitors to marvel over.

Access to the Waterberg is strictly controlled and visitors can either pre-book a guided game drive with the NWR reception or take a hike along one of the many clearly demarcated footpaths found throughout the reserve.  Hiking is a wonderful way to experience the natural beauty of the park and admire the 200 species of birds and many types of flora to be found here.  If you are lucky you may even see or hear kudu, cheetah, buffalo or leopard, which are all resident in the park.

If you just can’t get enough of this wonderfully unique, peaceful and unspoilt park, multi-day hikes can also be arranged.  You could also stay over at the  NWR lodge or the private Waterberg Wilderness lodge, located within the park, or one of several establishments nearby, which all comply with the rigorous standards of accommodation in Namibia.