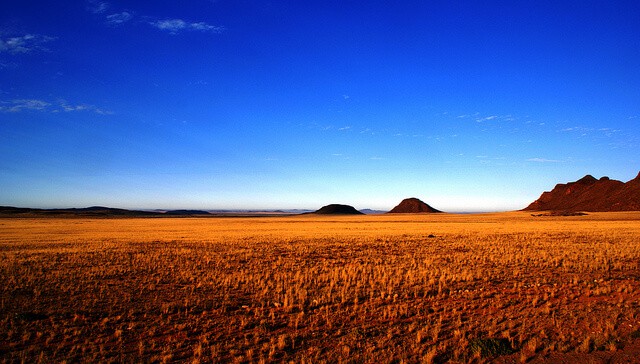 Namibia is one of Earth’s most fascinating places.  It is the site of the world’s oldest desert, a salt pan so vast it is visible from outer space, the world’s largest collection of rock art at Twyfelfontein, the greatest conservation success in Africa, despite the lowest rainfall in sub-Saharan Africa, and numerous species of animals and plants specifically adapted to survive in this remarkable place.

Even groups of lions, elephants and wild horses have changed their ways in order to survive the desert environment of this vast dry country; although many of the creatures found in Namibia occur nowhere, or almost nowhere, else on earth. Over a thousand species of insect, 6 types of frogs, 5 fish species and 59 reptiles are endemic to Namibia and each of them has an interesting survival story to tell.

Of these, the most well known and interesting are the smaller desert creatures and reptiles, which can be seen on specialised desert safaris in Namibia.

The Namib dune gecko (Pachydactylus rangei), with its pastel-hued camouflage and large appealing eyes, is the poster-child for Namibian desert life and has been nicknamed the world’s prettiest gecko. Superbly adapted, these geckos have webbed feet designed for scuttling across the sand and having no eyelids, form a comical sight licking their eyeballs clean with their tongue.  Although they usually obtain sufficient water from their insect prey, when in dire straits, the Namib Dune Gecko allows moisture from the ever-present desert fog to condense on its eyes, to be licked off for a quick drink.

Another well-known denizen of the desert is the shovel-snouted lizard (Meroles anchietae), famous for diving head-first into the sand when threatened. Also known as the thermal dancing lizard, this diurnal reptile combats the effects of the hot desert sand by holding two feet in the air at a time and then switching over, minimising the transferral of heat to its body and keeping its feet cool simultaneously.

Among the smallest adders in the world and a desert classic, the sidewinder snake (Bitis Perinqueyi), has evolved eyes on the top of its head to effectively spot its prey while buried in the sand.  It also has a tiny black tip to its tail, which is an attractive lure for its hapless prey species, while it lies concealed. The unique side-winding movement of this snake enables it to move swiftly over the hot shifting dunes, without getting burned or overheating.

One of the fastest-moving residents of the Namib is the dancing white lady or cartwheeling spider (Carparachne aureoflava).  This arachnid puts on a dramatic display when threatened, simply letting go and rolling down the nearest sand dune at 44 rotations per second – much faster than any of its predators can move. Upon landing, it leaps about erratically looking for the source of its disturbance, which is an entertaining display of acrobatics to watch.

These small creatures are but a minuscule sample of the amazing variety of living things to be admired and enjoyed while on a trip to Namibia, and booking your accommodation in Windhoek is the first step to discovering so many more.