The Himba of Namibia 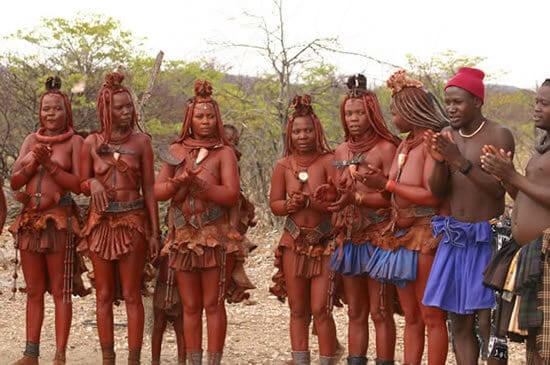 The Himba are today a relatively small group of no more than around 50 000 people who live in the northern region of Namibia. The Himba culture and the people themselves have survived not only the harsh climate of their land, but also war and persecution.  Today their culture remains much as it was around a hundred years ago; the women still colour their skin with red ochre, and the ancestral fires are still kept burning in the centre of the homesteads.

The Himba are a semi nomadic people, who live a conservative life in a very isolated area.  While the Himba are not cut off from Namibian development they do maintain their cultural practices and way of life. Himba children do go off to school to be educated, and the group does benefit from Namibian conservancies  but at the same time much has remained unchanged, as one Himba woman in her fifities said, “Life is still the same, but the children can read and write.”

The Himba homestead is arranged in a circular shape surrounding the ancestral fire and central livestock enclosure.  The Himba continue to practice ancestral worship and the fire is kept burning as a part of this belief system.  The livestock enclosure too is located here to allow proper relationship between humans and their ancestors.  The women decorate their skin with red ochre mixed with butter fat, and after marriage also colour their braids with the mixture.

Both Himba men and women braid their hair according to what stage they are in life. Children will wear two braided plaits, when girls reach puberty their hair will be braided forward, with the plait covering her eyes.  Single young men will have their plait braided backward.  After marriage women will wear an elaborate headdress of streams of braids coloured red with ochre. Married men wear a turban of plaits.

The Himba culture and people survived despite their harsh climate, severe droughts and war.  In the early 1900’s the Germans attempted genocide on the Himba people along with the Herero (who they are closely related to) and Nama.  Now the Himba land and culture is preserved and protected through the Namibian government’s policy of conservancies.  Iconic images of Himba people with their braids and reddish skin are celebrated in travel journals around the world for good reason.  When next in Namibia, travel north to experience the Himba culture and landscape for yourself.