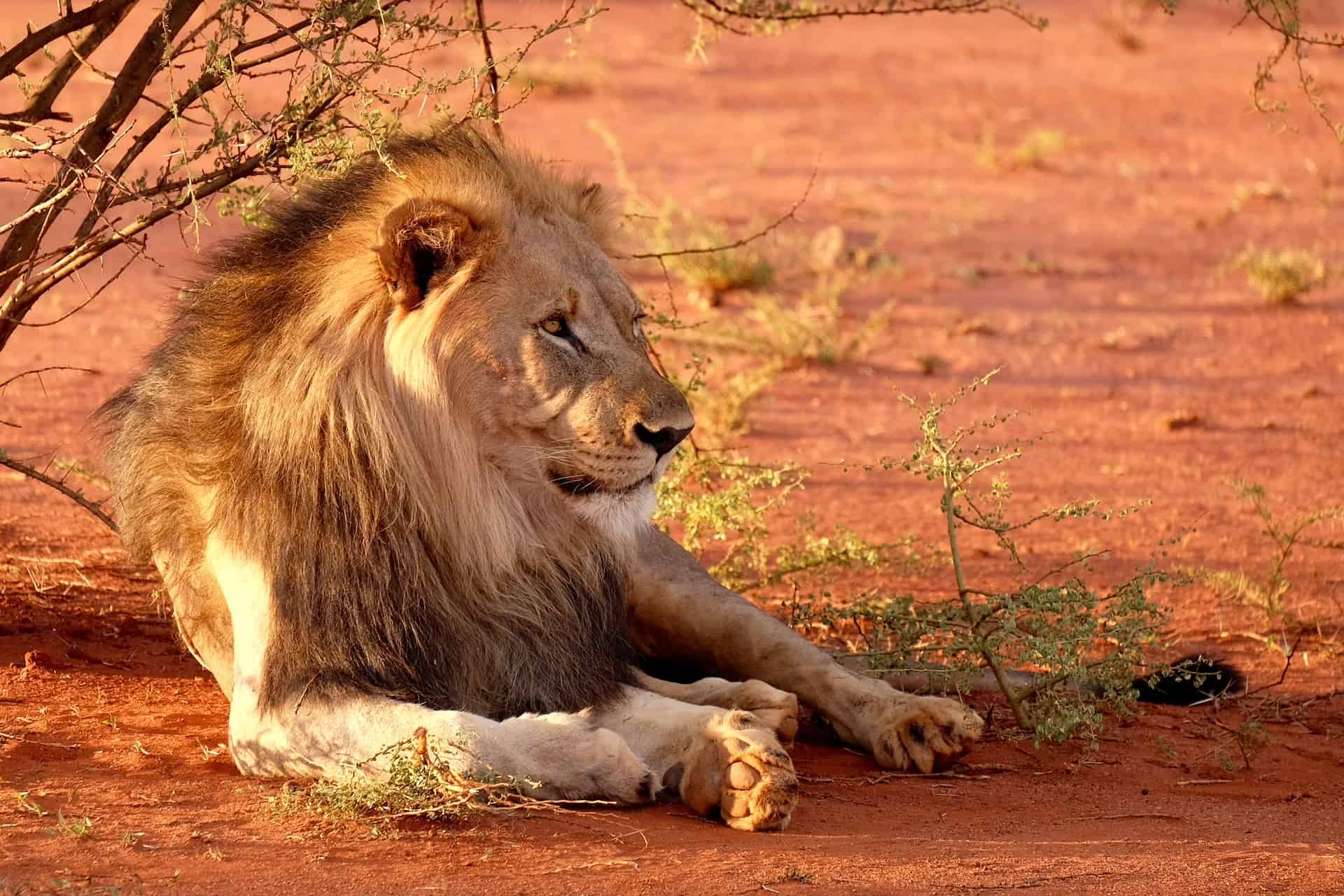 African lions, Panthera Leo, are the second largest creature of the family Felidae, after the tiger. Fossils suggest the species arose in Tanzania about 5 to 1.8 million years ago.

From there, they migrated across the globe, inhabiting Asia, Europe, South and North America. At the time, they were the most widespread large land animals in the world.

The modern lion descends from a species of Eurasian lion that returned to Africa to replace the original populations found there. Today, most African lions are confined to large game reserves.

The lion breaks all the rules of the cat kingdom. Unlike their kin, they’re highly sociable animals, living in groups (called prides) of approximately fifteen animals.

Most prides comprise five to ten females and their offspring and two or three related territorial males. They’re affectionate toward pride members, engaging in mutual grooming, purring, head rubbing, and touching while at rest.

Pride leadership is loose and gender-neutral, and changes often. Pride structure hinges more on the close bonds between the related females than it does on leadership. The pride does everything together, although females may choose to give birth in isolation. In most cases, two or more females give birth around the same time and raise their cubs together.

Females will allow cubs from other mothers to suckle which may ensure the survival of abandoned cubs. In dire circumstances, like drought, a lioness may abandon her cubs shortly after birth.

Male lions come and go based on the outcome of fights with outsiders attempting to usurp them. The female group remains unchanged regardless of these territorial scraps.

Lions spend most of the day lazing in the shade and sleep up to 18 hours a day. They prefer to hunt or scavenge during the cool hours of dusk and dawn, or at night.

The females do up to 95% of the pride’s hunting, using stalking tactics or ambush to overcome their prey. Their cooperative style ensures the pride can bring down much larger animals like buffaloes, and sometimes giraffes, rhinos, and hippos.

In most cases, the males make their presence known upwind which scares the prey species into running into the claws of the waiting females. Lions are slower than their prey species, so they rely on the element of surprise to get close enough to catch them.

They run the prey down and launch themselves onto its back, which causes the prey to lose balance and go down. They usually kill with a bite to the back of the neck or throat.

It can take a long time for lions to kill large animals like buffalo. These ungulates may also team up against prides of lion to defend herd members under attack. Enraged buffaloes can inflict deadly wounds on a lion and may attack lions even when unprovoked.

Lions have a better success rate with antelopes, zebras, and wildebeest but they will also hunt and kill smaller species like baboons and rodents.

At mealtimes, pride loyalties disappear and it’s every lion for themselves. A great deal of hissing, spitting, growling, and snatching accompanies every feeding frenzy and lions will often rest after an initial feed, lying close to the carcass to fend off any scavengers.

Lions never share their food if they can help it, not even with their offspring. As a result, the strongest pride members (usually the males) eat first, with the cubs getting little more than scraps.

Lions rely on their stealth, power, and co-operative hunting style to secure their meals, but they’re only successful 15 to 25% of the time. They rely on scavenging for most of their calorie intake and only hunt every three to four days.

Lions need between five and seven kilograms of meat every day to survive, but they can devour up to 50 kg of meat in one sitting.

In the wild, lions live for up to 15 years and usually succumb to age-related illness, disease, or injury. Older solitary lions may die of starvation due to an inability to hunt.

Lion cubs stay with their mothers until they reach sexual maturity at around two to three years old. At this stage, the dominant male drives them out and they must leave the pride to establish their own territory and find their own females.

This tactic ensures species diversity and also helps keep lion populations under control. Only one in eight male lions survive to reproduce.

These young males often team up with one or more of their siblings to form a coalition, which helps them hunt and defend themselves without their mother’s protection.

As they mature, these coalitions may challenge aging males in established prides for the right to take over their females. If they manage to drive the presiding male off, they will kill all his cubs so they may mate with the females as soon as possible.

Most male lions only remain with a pride for about five years, once they’ve outlived their usefulness, the lionesses drive them away, making space for younger, stronger blood.

Life is extremely hard for aging males driven out of the pride in this way as they must fend for themselves after a lifetime of collaborative living. Lionesses rarely leave their maternal pride, remaining with their relatives all their lives.

Where to See Lions in Africa

The preferred habit of the lion comprises thick scrub and open woodlands, as it’s easier to sneak up on their prey in this environment. If you want to see lions, you’re likely to find them in the vicinity of large game herds near water.

African lions are largely confined to southern and eastern Africa nowadays, with Botswana, Namibia, South Africa, and Zimbabwe being the only countries with growing populations.

The best places to see lions in Africa are:

In Namibia, you may also come across some of the unique desert-adapted lions.

There’s no doubt that a southern African safari is the best way to satisfy your curiosity about lions. Here you can embark on guided walks, guided and self-drive trips, or wait it out at game hides, to gain insights into these interesting creatures.

Browse our travel guide for all the best tips on where to go and what to do when visiting Africa.